In last weeks page New Orleans, LA – I said that this week I’d dedicate a whole page to the food we had in Louisiana. Louisiana is home to a huge mixing pot of cuisines, some of them amongst the most delicious and unique in the world.

Seasonings such as Cayenne pepper, Tony Chachere’s, Zatarain’s are prevalent in the cuisine of Louisiana. While the state is predominantly known for its Cajun and Creole cuisine, Native American cuisine preceded their contributions. Creole cuisine is influenced by traditional French cooking with Spanish, African, and Indian influences.

Although the food most identified with the state is the Cajun and Creole food of South Louisiana, North Louisiana also has its own unique cuisine. Traditionally, southern style soul food such as smothered pork chops, chicken and dumplings, candied yams, hot water cornbread, fried chicken, macaroni and cheese, collard greens, and black-eyed peas are commonly eaten in North Louisiana. For many years, crayfish [crawfish, freshwater lobsters/mudbugs] were not eaten outside of Cajun country. People north of Alexandria were more likely to eat fried chicken or barbecue. Fish fries featuring catfish took the place of crayfish boils. Today, boiled crayfish is served throughout the state.

Other foods popular in Louisiana include Gumbo, Étouffée, Jambalaya, Muffuletta, Po’boy, and Red Beans and Rice (traditionally eaten on Monday). Seafood is especially popular in Louisiana either as an ingredient or as a main dish such as Shrimp, Crayfish, Crabs, Oysters and Catfish. Swamp denizens such as Gator orAlligator, Frog Legs, and Turtle soup is popular around the bayous of south Louisiana.

I couldn’t possibly do the food of Louisiana justice in a post; we didn’t stay long enough, we only ate in Lafayette and New Orleans and there is just too damn much to say about it! Plus, there are entire books and blogs dedicated to Cajun and Creole food, Southern food, Native American food, hot sauces, crawfish, and even Po Boys – so I have no hope. I reckon you should go on a wiki-tangent or google it though; it’s fascinating.

What I am going to do, is just put up photos of the food we did have and say something about it. It will be a very quick introduction to some of the types of food you can eat there and will (hopefully) make you want to have some.

As you can imagine (in light of the law that allows you to carry booze around on the streets of NOLA), that weekend we partook in a lot of local brews. Coffee, local beer, frozen margaritas and even Cajun Lemonade (vodka, lemonade and hot sauce!). But I’ll mainly focus on food today, so here goes… 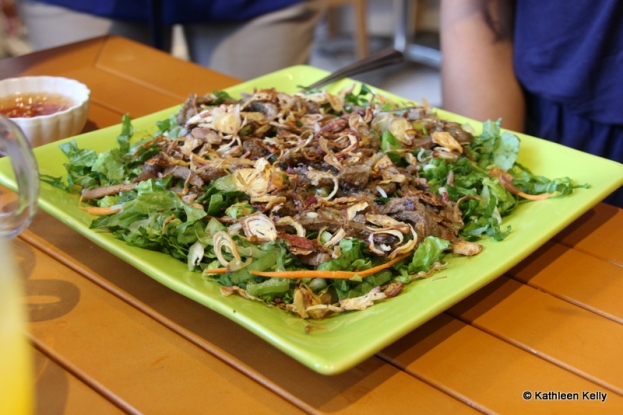 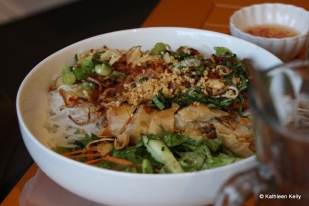 Vermicelli bowl – bun with grilled beef and an egg roll 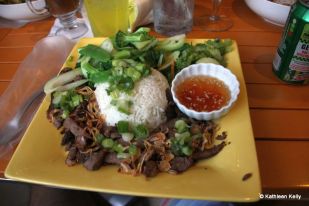 The next morning, we walked to a local spot for breakfast. It’s called Cake Café & Bakery on Chartres Street. They sell much more than cakes and I’m actually surprised they don’t market their breakfast menu more, because everything on the breakfast menu looked amazing. Dave and I had corned beef hash, Ellen had shrimp and grits and Benj had a toasted crab sandwich – and I’m pretty sure we all loved it. I’m definitely going to butter Nan up to try and make some corned beef hash with her famous corned beef back in Queensland (*wink wink* Nan!) 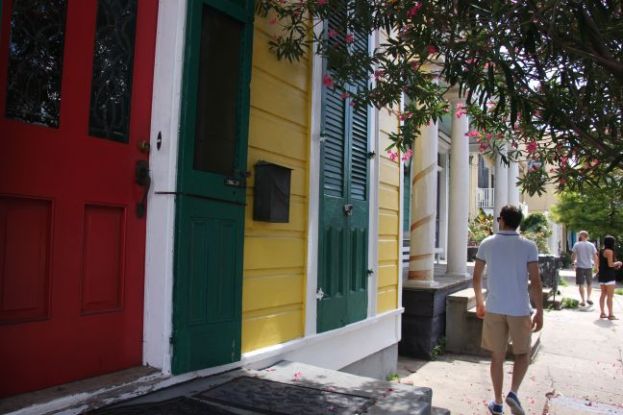 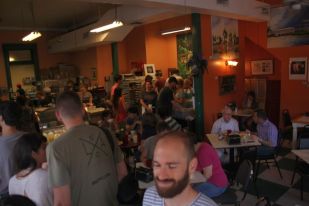 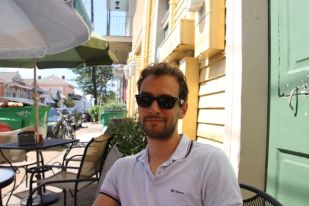 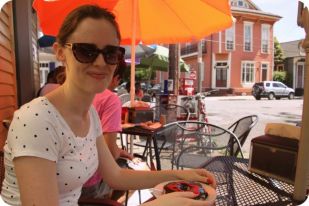 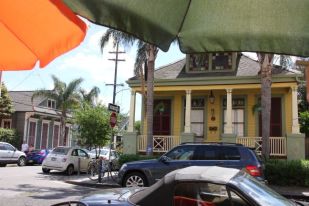 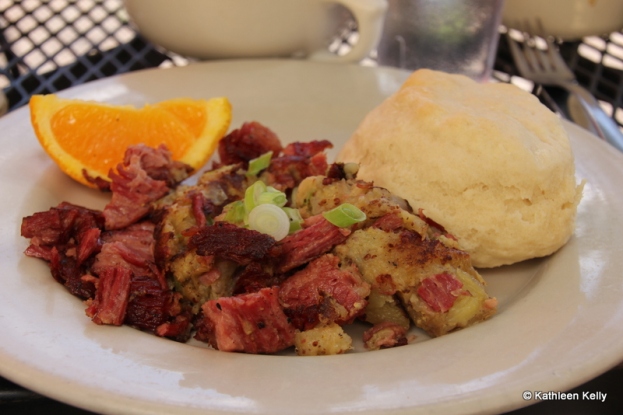 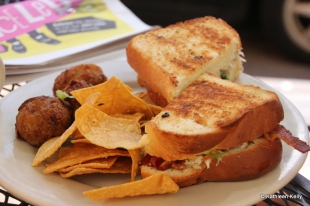 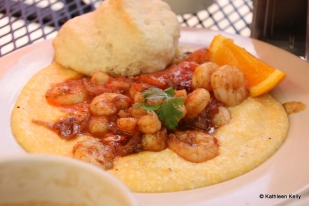 Ellen’s shrimp and grits with biscuit 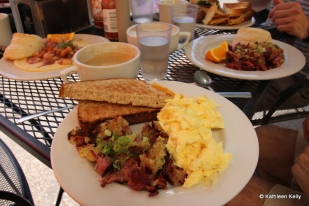 That night we went to another local haunt, The Praline Connection on Frenchmen Street. It serves “down-home” cajun-creole style soul food and we pretty much tried to sample as much food as possible in one dinner sitting. Dave literally got “Taste of Soul” Platter; which comes with Filé Gumbo, Red Beans & Rice, Jambalaya, Greens, Fried Chicken, Ribs and Bread Pudding. We tried to take photos of everything, but there was so much food. Sadly, we missed taking a photo of Benj’s Fried Chicken Livers and we didn’t take a photo of poor Ellen when she cracked a crab leg and it exploded all over her face (literally everywhere – in her eyes, her hair, on her clothes.. it was impressive). 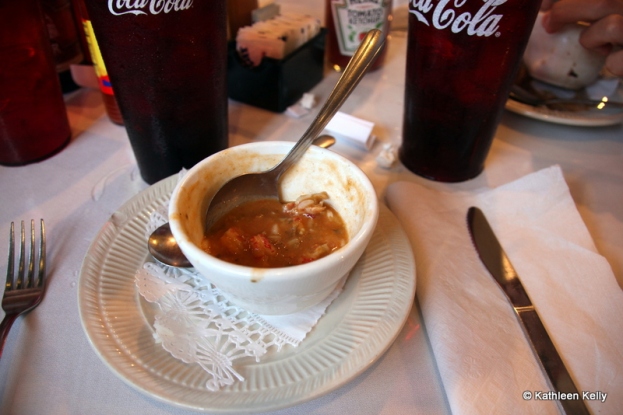 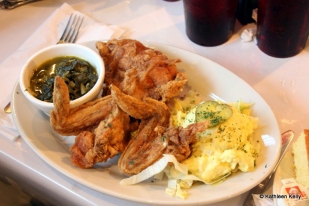 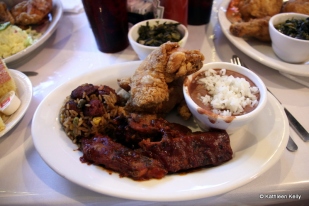 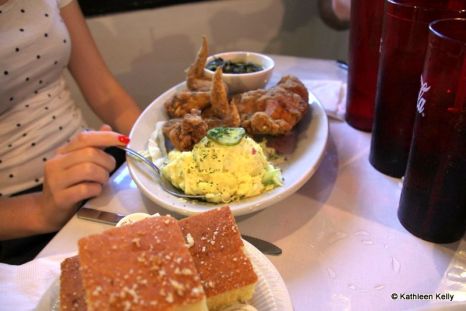 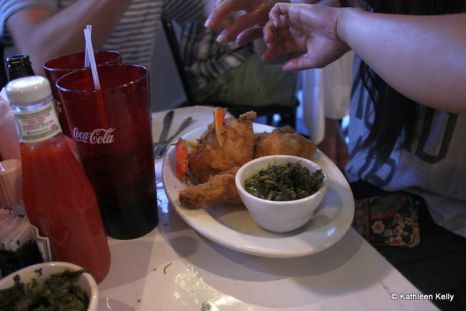 Ellen’s fried chicken (she was wiping crab off her face)

After dinner (if you can believe it), we went for a walk to get more food! This time we wanted to try beignets (a beignet  is a square piece of dough, fried and covered with powdered sugar).  So, we went to one of the most famous beignet cafes to give them a try – Cafe Du Monde.

They were delicious, but really freaking sweet and a tad deathly, like eating the hole of a doughnut covered in icing sugar. The whole cafe has a layer of icing sugar on the tables and floors (wouldn’t want to be there on a windy day lest you get sugar eye). Alas, I accidentally deleted our photos of that experience (due to sugar high), but I take comfort in the knowledge that I can repeat the deliciousness (and near icing-sugar-asphyxiation) by buying their beignet mix online. Click here for that. 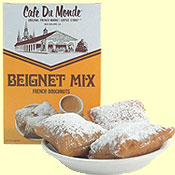 The next (and final) morning, I was still incredibly full from our foodie weekend. And, possibly hungover. We stayed local again and went to a spot on Frenchmen Street Cafe Rose Nicaud. If you click on that link there’s an interesting story about the woman who inspired the cafe Rose Nicaud (in the early 1800’s Rose Nicaud, a slave, became the first known coffee vendor in New Orleans). 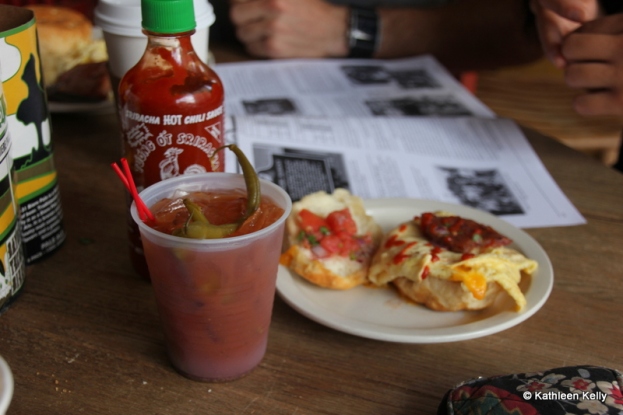 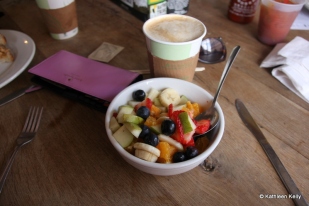 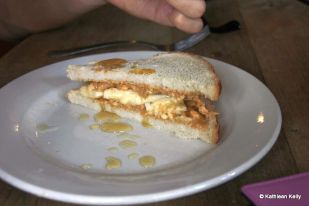 On the drive home, we stopped at Chris’ Poboys in Lafayette for Po Boys (or ‘Poor Boys’); traditional Louisianan sub sandwiches. Po boys almost always consists of meat, usually roast beef or fried seafood, served on baguette-like New Orleans French bread. They are no-fuss type subs, which is the point.

There are countless stories as to the origin of the term “po’ boy”. A popular local theory claims that “po’ boy”, as specifically referring to a type of sandwich, was coined in a New Orleans restaurant owned by Benny and Clovis Martin (originally from Raceland, Louisiana), former streetcar conductors. In 1929, during a four-month strike against the streetcar company, the Martin brothers served their former colleagues free sandwiches. The Martins’ restaurant workers jokingly referred to the strikers as “poor boys”, and soon the sandwiches themselves took on the name. In Louisiana dialect, this is naturally shortened to “po’ boy – Wikipedia 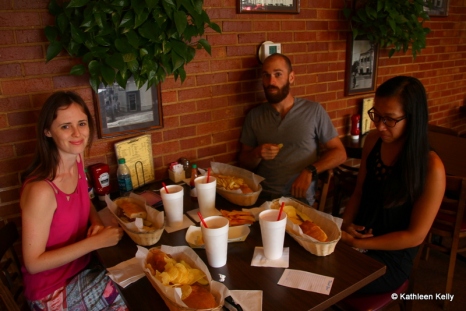 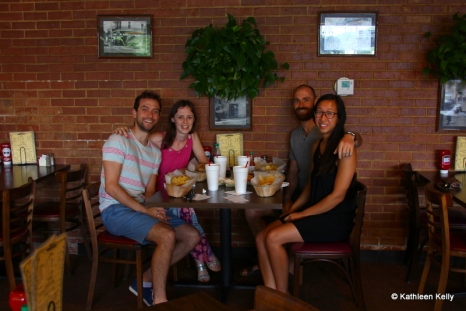 So that pretty much sums up the food experiences we photographed (and can remember). The good times certainly were rolling, and we spent most of the weekend full and happy. I think few things in life are better than great food experiences with great company.

I’m already mentally planning the next trip back, and this one must involve a Cajun-style crawfish boil…

4 responses to “A taste of Louisiana”